How Do Air Compressors Work? We’ll Show You Here

Not so long ago, air compressors and pneumatic tools were the reserve of professional workshops, garages, and construction sites. However, in recent years smaller and more affordable compressors have have gradually been making their way into home workshops and DIY tool kits, making pneumatic tools accessible to anyone. But how do they work?

The mechanics of air compression

The most common type of air compressor in the domestic market are positive displacement air compressors. These work by squeezing air into an increasingly tight space until it reaches the desires PSI (Pounds per square inch). In order to achieve this the compressor uses a piston very similar to the type found in a car engine.

When attached to a power source the piston moves up and down a shaft. When the piston moves down it sucks air into the shaft through a vent, when it moves up the vents that allowed air to enter the shaft are closed and the trapped air is compressed before being released into a storage tank.
In order to create, store, and deliver the air at the correct PSI, the compressor has a number of sensors and gauges.

One of these opens a valve once the air is compressed to the desired PSI, allowing it to enter a storage tank. A further sensor identifies when the tank is full and stops the piston until a refill is required. The final sensor controls the PSI of the air being supplied to your pneumatic tool, ensuring that it works correctly.

What is the difference between a
1 or 2 cylinder compressor?

Alternatively, sometimes compressors are referred to as 2 cylinder but are instead 2 stage compressors. This means that it will compress air on both the up motion and the down motion.

In addition to other compressor variables, some require oil in order to work. While others are oil free. Which you require will depend on how you use your compressor but notably, oil lubricated compressors are not suitable for wood work or paint spraying due to oil particles being passed to the airflow.

The difference CFM and SCFM?

CFM (cubic feet per minute) is one of the ways that you can gauge how powerful a compressor is. This measurement is used to gage the rate at which a volume of air is delivered.

Unfortunately this can be affected by anything from atmospheric conditions to temperature so a unit called SCFM (standard cubic feet per minute) is used in its place. Unlike CFM, SCFM is measured at sea level, at a temperature of 68 degrees fahrenheit, and 36% relative humidity, which ensures that it can be directly compared.

What other types of air compressor are available?

Although displacement compressors are the most common on the domestic market there are several other types available including: 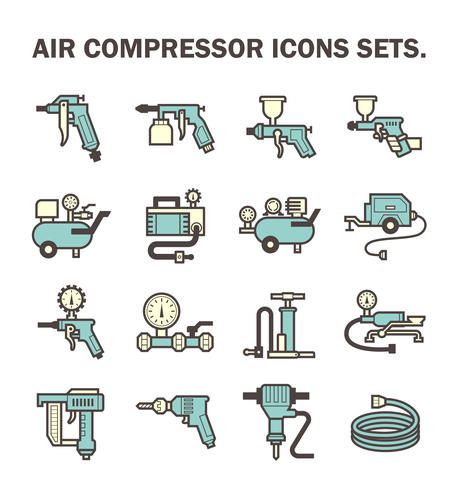 These compressors also use positive displacement to compress air however instead of a piston, two screws are used to create the compression. Unlike the piston compressor which stops once the air tank is full the rotary compressor is in continual motion, regulating the compressed air by speed rather than a full stop.

It’s worth noting that these are nearly always oil cooled. So they will not be suitable for all job types.

Unlike the other compressors mentioned, this one uses dynamic compression rather than positive displacement. To achieve compression a fast moving impeller displaces the air. Typically this type of compressor has a far higher capacity than the others, making it better for larger pneumatic tools.